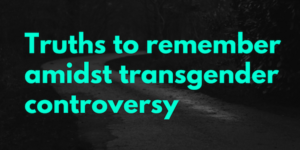 Astonishing confusion has arisen in our culture concerning gender. Let us allow the Bible and common sense to ground our thinking and our appeals to others. While the Bible does not mention transgenderism, here are some truths to remember:

God, as Creator, assigns gender. “So God created man in his own image, in the image of God he created him; male and female he created them” (Genesis 1:27; cf. Genesis 5:1-2; Matthew 19:4). Gender is not assigned by any act or thought of any people. Because God capably assigns gender, there is no such thing as a person being “trapped” in an opposite-gender body.

The Bible teaches that men should behave as men and women as women. It is sinful to represent oneself as a member of the opposite gender. Paul taught that people should behave in keeping with cultural expectations for the distinctions between men and women (1 Corinthians 11:13-14).

It is not a sin to be tempted. It is sinful to act on a temptation, but temptation itself is not a sin. Our Lord was tempted, but did not sin (Matthew 4:1-11; cf. Hebrews 4:15). A person may have a predisposition to murder or to steal, but if he resists these temptations, then he has successfully withstood the devil’s test; the same is true concerning the sins of homosexuality and transgenderism.

God loves those who are transgender and hopes they will repent. God is “not wishing that any should perish, but that all should reach repentance” (2 Peter 3:9). We must feel exactly the same way, as we lovingly urge those who are lost in sin to repent. May God help us as we reach out to sinners of all kinds, who need the gospel.